JNF Future is the gateway for the next generation to Jewish National Fund (JNF), the premier charitable organization specializing in the development of Israeli land and infrastructure. JNF Future aims to engage individuals between the ages of 25 to 40 through programming and events, missions to Israel and forums with young Jewish leaders.

The goal is to increase support and awareness for JNF’s initiatives, and ultimately to raise funds for these projects in order to enhance the lives of the citizens of Israel.

The four pillars of JNF Future are:

Creating initiatives in our city that will benefit and enhance the life of Israel’s citizens through JNF projects.

Creating opportunities for young professionals to learn about the different projects and causes JNF helps to create; teaching the different ways JNF is working in research and development to help grow/nourish Israel.

Engaging young adults and young professionals in meaningful Israel and Zionist programming that makes a difference in our community and in the State of Israel.

Creating opportunities for young leaders to be a part of JNF’s future and helping it grow and succeed.


There are many ways for you to get involved with JNF Future to make a difference in Israel.

You can…
-Join a committee
-Volunteer at an event
-Create new outreach, education or fundraising initiatives
-Attend an event 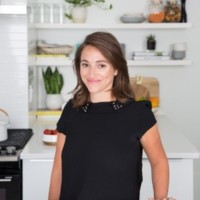 Danielle Faber is a Toronto-based member of the JNF Future Executive Committee. She has been working with JNF for over 4 years, and her landmark event is the Tech Shuk, a startup showcase and networking event for Canadian and Israeli entrepreneurs, venture capitalists and young professionals. For her day job, she is a marketing specialist and founder of the online swimwear shop, Hayam Swim. You can find her on Instagram and Twitter at @dfabes. 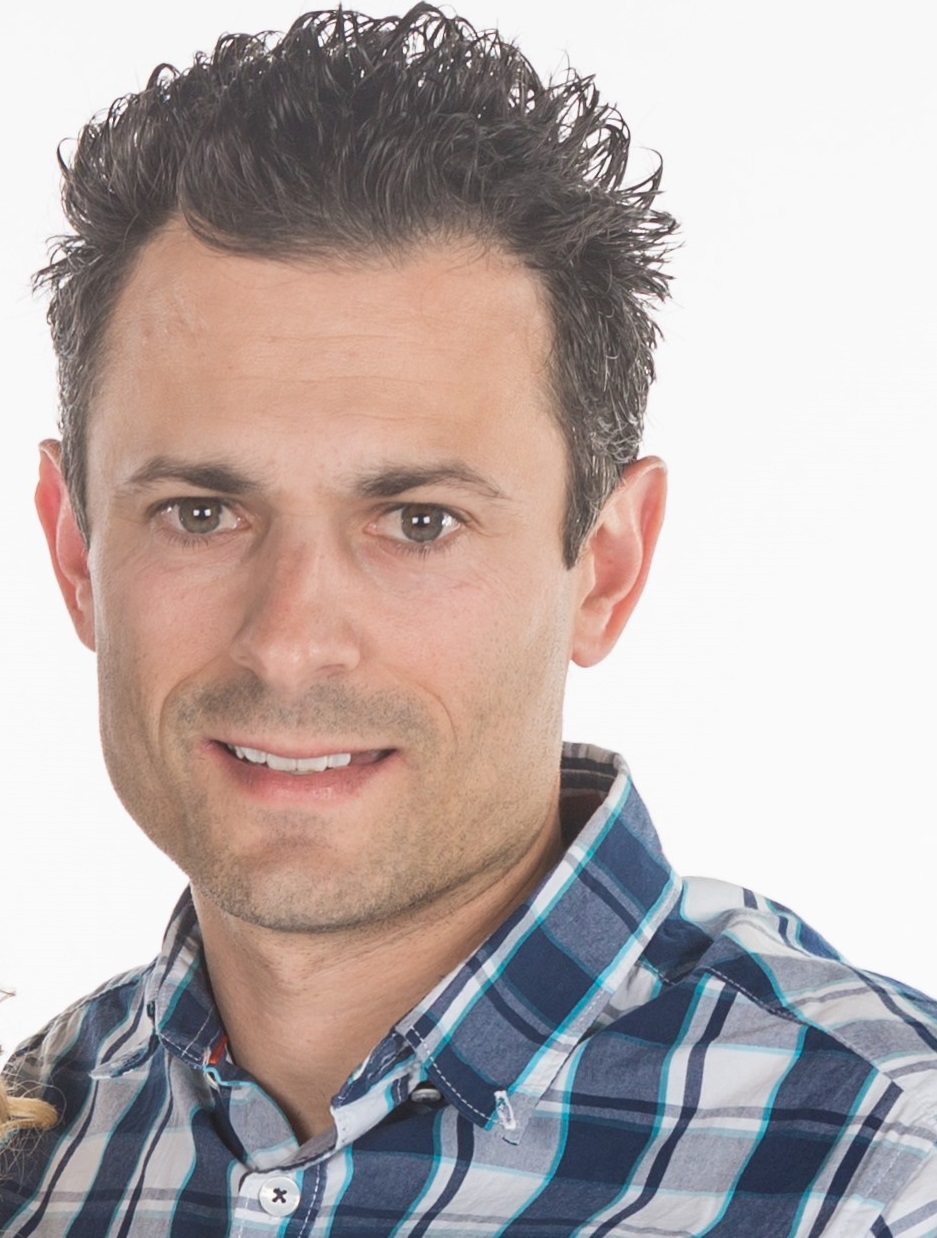 Jordan Waldman is a senior partner with The Corporate Solutions Team and a Certified Financial Planner. He has been involved with JNF and other organizations for many years on a variety of events and projects to benefit the community. Growing up in a modern-day Jewish home in Toronto, he learned about the importance of giving back and assisting others in a time of need. He has traveled to Israel several times and understands the value of fundraising and donor projects, and the impact it can have on the people of Israel and the nation’s development. As a married father of 3 young girls between the ages of 3 and 7, it is still a priority to volunteer with organizations and donates to their causes. His goal with the JNF Future Executive committee is to spread the message to other young professionals about the organization and help make each event successful to achieve the overall fundraising goals of the organization. 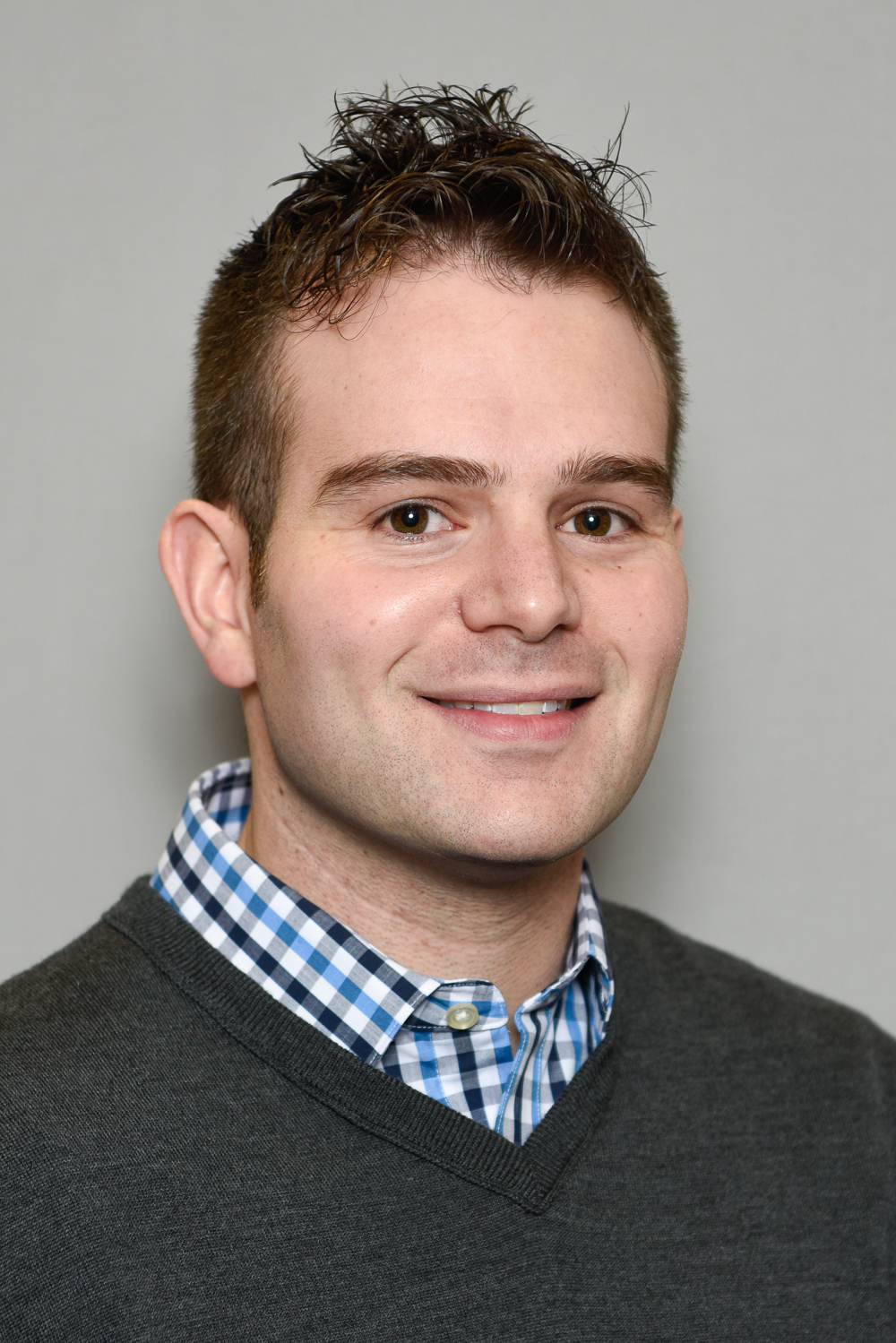 In 2008, Jared went to Israel for his first time on a Birthright trip and instantly fell in love with the Jewish Homeland. So much so, that upon his return he trained to be a Madrich (Trip Leader) and subsequently lead two Birthright Trips in 2011 and 2012. Wanting to continue his involvement in the Toronto Jewish Community, Jared volunteered and chaired events for UJA and the Jewish Urban Meeting Place (JUMP). In 2013, he was invited to co-chair the Pitch for Israel and was first exposed to volunteering with JNF. In addition to co-chairing two subsequent tournaments, Jared was asked to join the JNF Future Committee and is now serving in his second year as Co-Chair of the Young Professional Board in addition to the Toronto Executive Board. His hope is to get more people involved in the community and expose people to the beauty, wonder, and importance of Israel. When Jared is not volunteering, he works as a Key Account Manager for Rich Products, a multinational privately held Food Company. In addition to being a foodie, Jared loves spending time with his family and playing sports. 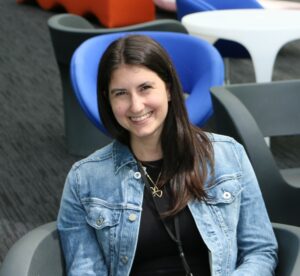 Growing up in Montreal, Aliza Fagen has always had a strong connection to Israel and the Jewish community. After graduating with a BCOM degree from McGill University, Aliza moved to Toronto to pursue a career in marketing and entertainment. Aliza currently works as International Brand Manager at Nelvana Enterprises. Believing that our strength comes from our connection to Israel, Aliza got involved with Israel Bonds Canada in 2016, co-chairing their New Leadership Division in Toronto and was appointed in 2019 to the Board of Directors of Israel Bonds Canada. As a member of Toronto’s JNF Future Executive Committee, she is excited to help build & inspire the next generation of professionals to invest & support the state of Israel and the Toronto Jewish community. 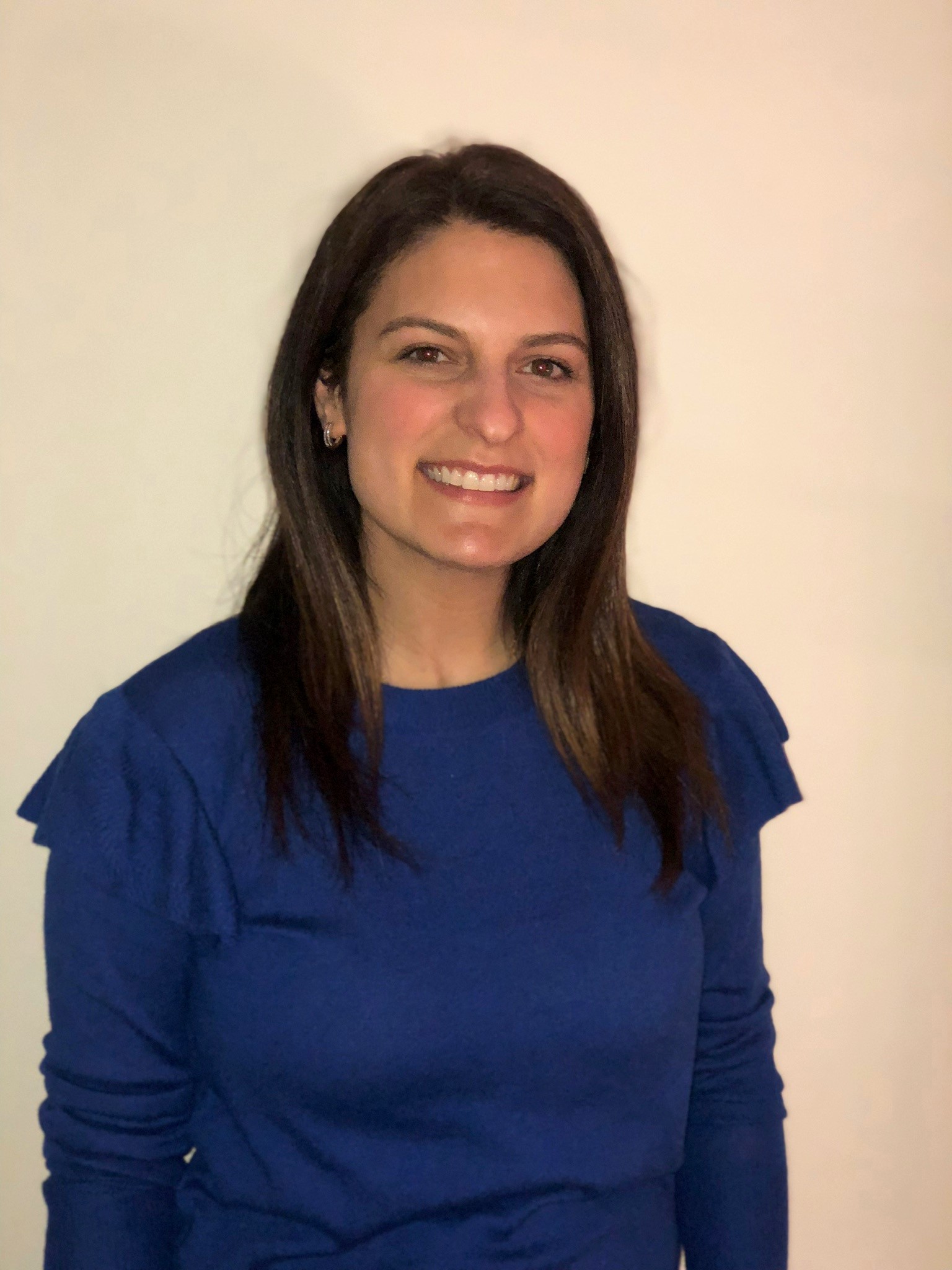 Faith Feldman Stoppel has been involved with JNF for almost 10 years. She began by attending events and fundraisers and became more involved in leadership by chairing JNF Future events such as Cook for a Cause for 3 years. She is now in her second year leading the young professional division as co-chair of JNF Future. Faith is also a member of the JNF Toronto board representing the interests of other young professionals like herself. Faith graduated with a BA from McGill University and a JD from Western Law. Faith is a lawyer in Toronto but she focuses on helping people across Canada by managing the family law website MySupportCalculator.ca. Faith is married and welcomed her first child in August 2018. 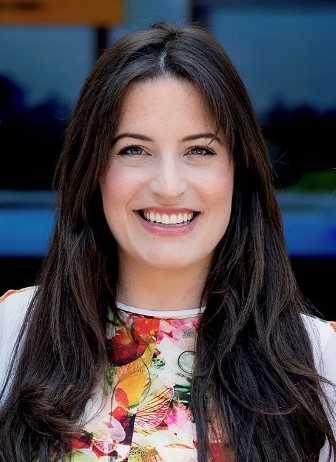 Kortney Shapiro was born and raised in Toronto, Canada. Having always been drawn to community work, while studying at McGill University, Kortney became active with Hillel McGill and it was there that she spearheaded and organized a Holocaust education week series for students on campus in 2007, which became an annual program. As the granddaughter of a Holocaust survivor, education and awareness have always resonated with Kortney, and have become an integral component of her commitment to advocacy and community engagement. Continuing her volunteer and lay leadership work throughout her postgraduate studies at Humber College, Kortney has been an active member in both the Jewish and general community, having sat on various boards and committees given her passion for relationship-building and community advocacy.

In 2016, Kortney graduated from Osgoode Hall Law School. Having always had a passion for the written word, Kortney interned at an international fashion magazine and has since written for the Canadian Jewish News and SheDoestheCity.com (SDTC).

Kortney is currently acting as legal counsel in the regulatory space. In her spare time, she enjoys spending time with friends and family, trying new restaurants, traveling and being outdoors while embracing the adventure that each day brings. 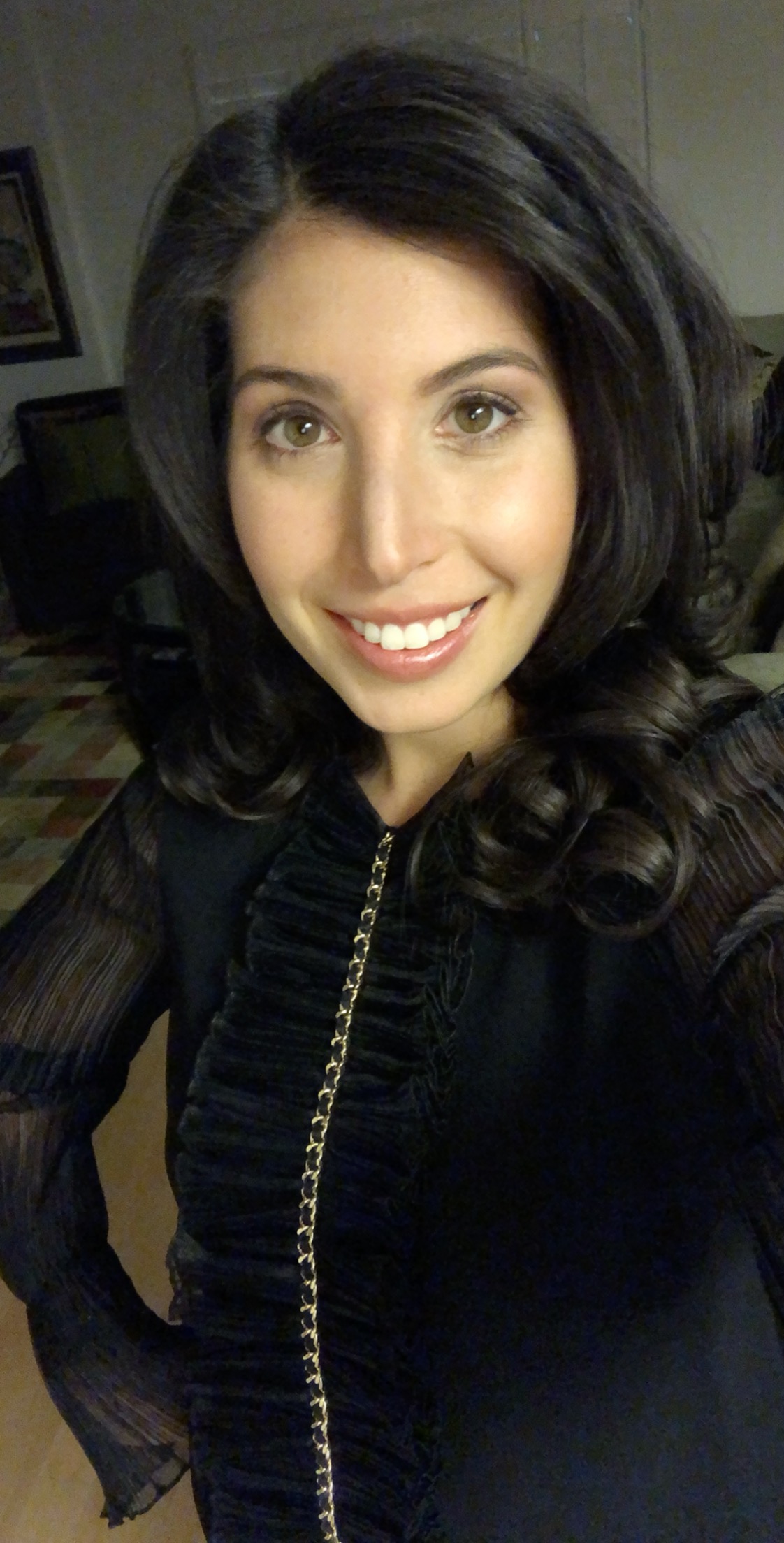 Brittany Sud is an estates and trusts lawyer at Miller Thomson LLP. Her practice is focused on planning and administrative matters. She assists high net worth clients, entrepreneurs and professionals with wills, powers of attorney, domestic contracts and trusts.
Brittany has developed and implemented cohesive estate plans for clients, reflecting their financial objectives and both short and long-term goals. She has advised on probate planning, family business succession planning, asset protection strategies and disability planning. Brittany’s estate administration practice includes preparing applications for probate and administering the Canadian estates of non-residents.
From a young age Brittany’s family instilled in her the importance of giving back to her community. Through her community service and numerous trips to Israel, Brittany has been a dedicated supporter of JNF since childhood. Last year, Brittany took the next step by joining the JNF Future Executive. Brittany’s goal is to inspire others not just to write a cheque, but also to become active participants in ensuring our community’s legacy. 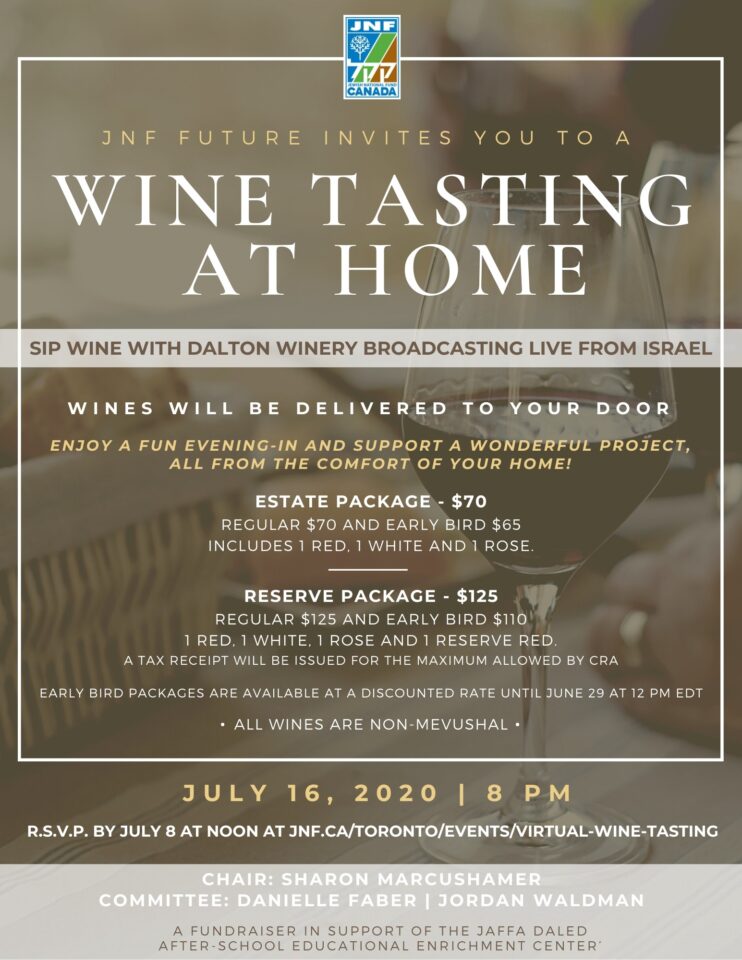 About the Jaffa Institute:

The Jaffa Institute was established in 1982 as a private, non-profit, multi-service social agency to assist severely disadvantaged children and their families from the impoverished communities of Jaffa, South Tel Aviv, Bat Yam, and Bet Shemesh in Israel. Their mission is to provide educational, nutritional, therapeutic, and social enrichment programs that develop children’s positive attitudes and skills to break the cycle of intergenerational poverty. Their clients include; at-risk youth, Holocaust survivors and abused women.

The Jaffa Daled After-School Educational Enrichment Center provides educational, nutritional, recreational and therapeutic support to at-risk children and teenagers, 70% of whom are of Ethiopian descent. Maintaining a balance of children from Ethiopian families and those from other ethnic backgrounds avoids isolating the children and teenagers of Ethiopian descent and encourages their integration into Israeli society. The Center is open every weekday during the school year and operates a camp program during all school vacations.

Upon arrival the children receive a hot meal. For many of the children, this is their only full meal of the day. The children then spend one hour focused on academics, during which time they complete their homework, play educational games, and receive specialized instruction to bolster areas of weakness. Additionally, the children participate in a variety of enriching recreational activities. Children who display behavioural or emotional challenges receive therapeutic treatment from certified social workers and therapists.

While the Center currently serves 30 children, there remains a critical need within the community to assist additional children and teenagers and their families. The neighborhood in which the Center operates is one of the most deprived and poverty stricken areas in Israel, with 50% of the population living below the poverty line. 53% of the children in this area drop out of school before completing the 12th grade.

The money being raised is helping to expand programs to help marginalized teenagers at Jaffa Daled to enjoy the full benefit of the Jaffa Daled Enrichment Programs. In the after-school and early evening hours, the Center will house new educational enrichment groups designed to meet the needs of teenagers who have been involved in dangerous situations as a result of their troubled backgrounds. The staff will provide these youth with emotional support and tools to cope with the challenges of adolescence.

Later in the evening, the Center will host parents from the community, including the parents of children in our care. During these sessions, the parents will receive a supportive framework and tools to empower them to improve their relationships and communication with their children.